Our next destination is Kinglake Homestead, place for WWOOFing, located in the northeast of Melbourne.

It is about 1.5 hours by car from Melbourne city.

We were planning to go there by public transportation, but Steve, WWOOF host, kindly proposed us to pick us up at the city.

AK was highly appreciated his offer, but for me, it was too kind (1.5hours drive!!) that i could not believe…

Anyway we decided to accept his offer.

Since we had a bit of time before he arrives, we picked trash near the load as usual! 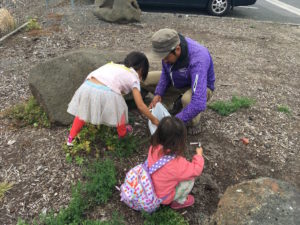 And, as usual, AK was eating apple. Almost all.. Lol 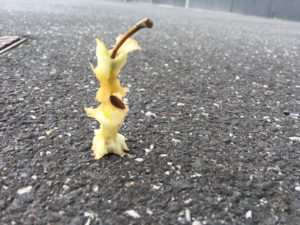 Steve kindly picked us up all the way to the city and we finally arrived at Kinglake Homestead. 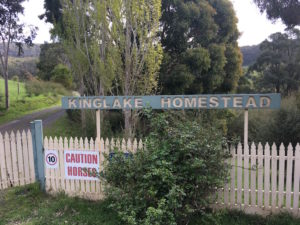 I remember that the size of his land was over 200 acres (17 times of Tokyo Dome).

He lives there by himself. He mainly do the things as follows.

・Hosting AirBnB (website is managed by a volunteer) （He wants to pay money for the job but she does not accepting it..)

・Working for a company from the early evening to early morning, 5days a week..

Steve was mainly involved in growing and selling medicinal plants, but his land got damaged from the big bush fire, which occurred several years ago in the area, and he couldn’t continue his business.

Therefore, he now work hard outside to make money for recovering his business.

These are the things I did.

However, “You don’t need to work hard, just relax and have fun with your children” and always went to work at around 2pm so we could hardly work.

Since we came to the place as WWOOFers, we are supposed to work but he was so kind that he continuously care for us.

We brought the tractor into the eucalyptus forest. Steve let MI to seat at driver’s seat and she was excited!

KO was so happy that she turned around with face wreathed in smiles many times. 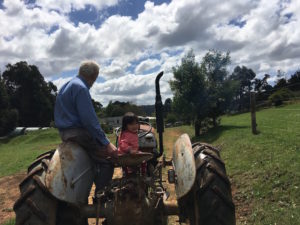 Once we arrived at the place, Steve selected a tree and cut it down.

After that, we cut it into a smaller pieces with a chain saw. 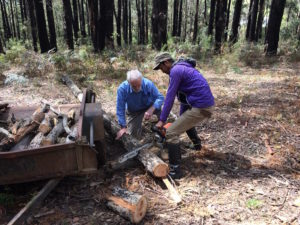 Because of bush fire, woods in the back is black.. However  the trees are still alive. Great life force. 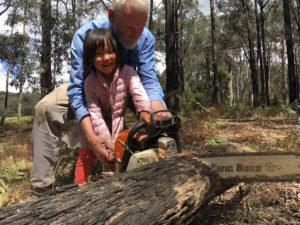 And then, putted the round logged on the wood splitting machine. Firewoods! 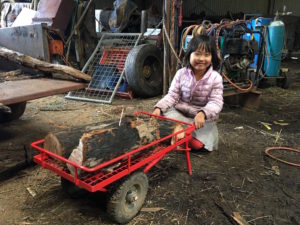 A wheelbarrow that Steve made for children. How kind he is.. 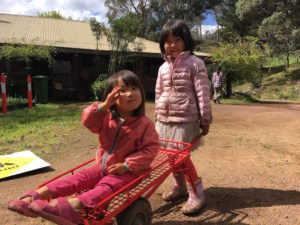 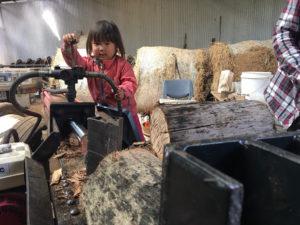 A little craftswoman of firewood making!!

I had never seen this method before.

· Drill two holes at the bottom of plastic case, and a lot at the top.

· Put podding mix in the case until the hole in the bottom comes to 1/3.

· Put the seeds in surface.

·Sprinkle fine sand on the surface. (Thickness is 1 to 4 times the size of a seed.)

·Water moderately, close a lid, and place where the sun is not too strong. 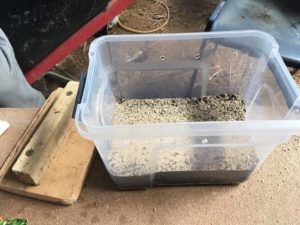 Why close a lid?

The reason is to prevent birds from eating seeds and the soil from drying out.

The holes under the box are to prevent water getting too much.

The upper holes are to keep the air in the box fresh. (When the inside of the box gets hot, the air goes out, and when it gets cold, air comes in.)

This topic is unrelated to WWOOFing.

I believe  “fate” or “existence of a spirit” or something that can not be explained scientifically.

So, when I feel something, I try to follow it as much as possible. And this time it happened!!

A few months ago, I found out Mr. Akihiro Nishino who is a Japanese comedian was on Facebook by chance and started following him.

But I did not know that he is such an ambitious guy!

For instance, he declares to defeat Disney or tries to issue “Letter pot”, the system that letter that can convert into money.

Maybe you can’t understand what I want to say, but anyway,  he is fundamentally kind.

And now, surprisingly I found his book Magic Compass in my room, in Australia!

I thought I have to read this!

He says again and again that the time will come when the trust is more important than money.

I think some spirit send this message to me!!

Our Way After The Trip -What is Amby Life-

Hi. Yuta writing. My travel finished (3 months in Philippines and Thailand by myself and Australia and NZ with my family) and came back to Japan in the end of 2017. This time...

Hi,I'm YH. We moved from Newcastle to Sydney by Greyhound bus. It takes approximately 2.5 hours and arrived at PM11:30. We were amazed to see such a big city after a long ...

Hi. YH and AK writing. We left Australia, where we stayed for two and a half months, and arrived at New Zealand! Goodbye Australia, Hello New Zealand. The day of departure...

HI I’m Yuta. We left Atamai Village and head to the next adventure. This time is a bit long journey. Route We rented a car and 8days of sightseeing started (blue line b...
Day62-65 French Island.2
Day66-74 Kinglake vol.2